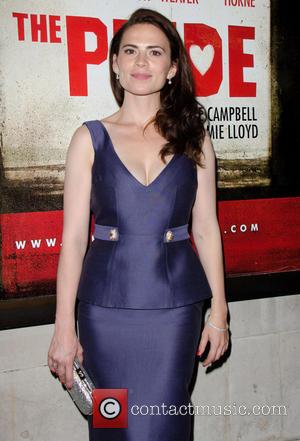 British actress Hayley Atwell faced a last-minute dash to make it on stage for a theatre performance in London this week (beg18Aug13) after filming on her new movie Cinderella over-ran.

The Captain America: The First Avenger star is currently appearing in a play called The Pride in the British capital, and she is also working on Kenneth Branagh's new movie adaptation of the classic fairytale.

Shooting on the film ran over schedule this week (beg19Aug13), forcing the actress to risk axing her appearance in the Monday night (19Aug13) performance of The Pride.

However, Atwell managed to finish work early and made a last-minute dash from the Pinewood Studios in Buckinghamshire, England to the theatre.

The actress made it on time and the show went ahead as planned, and she addressed the drama in a post on her Twitter.com page, writing, "Finished filming early so I Will be appearing in The Pride this evening at Trafalgar Studios. Come join us! It's a fantastic play."

In a post on her blog for Harpersbazaar.co.uk, the actress revealed she didn't realise she was due to start filming Cinderella until the opening night of her play.

She writes, "As we arrive at the after party, at around 11pm, my agent tells me 'You have an 8am pick-up to go to Pinewood Studios for rehearsals in the morning.' Eek. This is news to me... So I say 'hello' to our guests, speak to the press, then head straight home to re-read the script... No rest for the wicked... The next day I'm sitting in a rehearsal room with Ken Branagh discussing an entirely new character. By 4pm I've had costume and wig fittings for Cinderella and then I jump back in the car and head to the theatre."