Hayley Atwell is proud that there isn't a sex scene between her character and Chris Evans in 'Captain America: The First Avenger' - because it makes the 1940s-set story more believable. 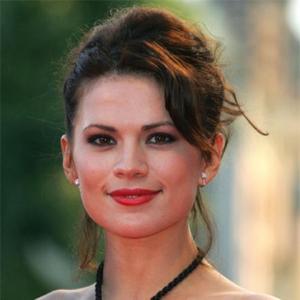 Hayley Atwell thinks it's a good thing she didn't have sex with Chris Evans in 'Captain America: The First Avenger'.

The brunette beauty found it "refreshing" and "innocent" that her character Peggy Carter did not go all the way with the 30-year-old star's superhero alter-ego in the 1940s-based film because it was more "traditional".

She exclusively told BANG Showbiz: "I really liked it that there was no sex scene in The Script because I thought, 'That was very refreshing and innocent and how traditional.' I think it was more in-keeping with the time.

"I've got a romantic notion that in the 40s there were classy ladies who had built up their relationships with men and subtle flirtation would go on for weeks before the final deal was sealed. And I think that's more exciting because you're not giving as much away. I wanted the audience to come away and think, 'I think that couple did actually really love each other.' "

The 29-year-old actress generally finds filming sex scenes to be "funny", but she admits it can also be "weird" being naked in front of a male production team who seem to be "enjoying it".

She added: "Sex scenes are so funny to shoot, you are naked in them and both wearing nappies or covers. It's often a bit cold on set and you're in a warehouse or a studio and you're surrounded by guys who feel very uncomfortable and they are all trying to be respectful but they seem to be enjoying it at the same time. So there is a lot of weird stuff going on."