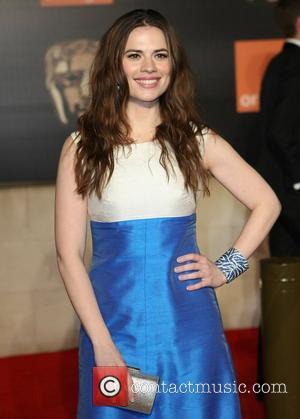 Actress Hayley Atwell has criticised British Academy of Film and Television Arts (BAFTA) bosses for failing to include any women on the shortlist for the coveted Rising Star award.
Kidulthood star Adam Deacon scooped the trophy at the glitzy Bafta prizegiving in London on Sunday (12Feb12), seeing off competition from an all-male list of nominees including Chris Hemsworth, Chris O'Dowd, Eddie Redmayne and Tom Hiddleston.
However, Captain America star Atwell insists she was disappointed to see female stars including The Help's Jessica Chastain, Like Crazy star Felicity Jones and Jennifer Lawrence dropped from the longlist of eight.
She tells Britain's Daily Telegraph, "There were girls on the longlist and I think it's really odd that girls haven't made it where guys have. We'd hope that gender doesn't really come into it and it's about the body of work that they produce that year, but it seems that hasn't been the case. Felicity Jones should have been nominated."
Previous winners of the award, which is voted for by the public, have included Eva Green and Kristen Stewart.