Hayden Panettiere had a fright during a jet ski ride when her boyfriend, World Heavyweight Champion boxer Wladimir Klitschko, jumped on and almost sank the vehicle. 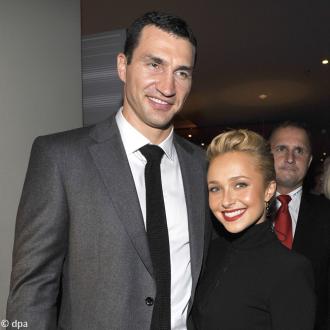 Hayden Panettiere's boyfriend Wladimir Klitschko almost sank her jet ski while she was riding it.

During an appearance on 'The Late Show with David Letterman', Hayden explained: ''They are really safe with a 110 pound girl on it when you add a 245 pound Ukrainian on the back, it doesn't go so well! This thing started sinking. I kid you not, I felt so badass on this thing. I was riding around with my girlfriend and he gets on and he is like, 'Let's go for a cruise.' I was like, 'OK.' He gets on this thing and we are going around and this thing fully lifted up (vertically) down the coast line. I got so mad, I got so scared that I got mad at him and I was like, 'Get off, we have to go back, we have to go back right now, you cannot be on this thing!' The water started coming over the edge, I was like, 'This is illegal.' ''

Hayden and Wladimir, 37, first began dating in 2009 but the couple ended their romance just two years later in 2011. They got back together in January 2013 and although rumours are rife they're engaged she is staying silent on the matter.

The diminutive 'Nashville' star didn't like watching Wladimir fight when they first got together but now she has grown to appreciate boxing.

She said: ''I didn't like boxing in the beginning, my dad use to play it once in a while on the TV and I just went, 'Who would get in a ring and just want to beat somebody up for a living, that's ridiculous.' That sounds weird. When I got to know it, I have become quite a fan.''