'Nashville' actress Hayden Panettiere, who is dating boxer Wladimir Klitschko, has revealed she is attracted to ''wordly'', more experienced men. 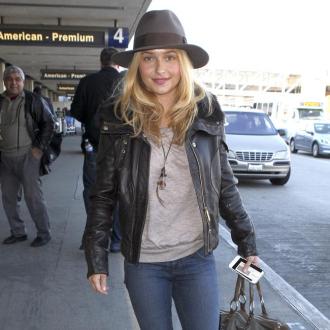 The 23-year-old actress is in a relationship with boxer Wladimir Klitschko, 36, and previously dated her 'Heroes' co-star Milo Ventimiglia, 35, and insisted while she likes ''worldly'' people she didn't decide on ''older men''.

She told the Sunday Telegraph newspaper's Stella magazine: ''It was never a case of me making a decision, saying, 'I want to date older men'.

''But I am drawn to people who make me up my game, who bring me up to their level.

''I want to be with somebody who is more worldly than me, somebody who can give me guidance and is completely secure and comfortable with who they are.''

Hayden and Wladimir previously dated for two years until they first broke up in May 2011 before reconciling since her split from American football player Scotty McKnight late last year.

Although their reunion might surprise people, Hayden insisted she is ''happy'' while admitting people looking in might not understand.

She continued: ''People think it seems very strange from the outside, then they see the inner workings of it, and they understand it.

''But I didn't become an actor to put it out there for the world to judge. The fact is, I'm happy, and that's all that matters.''