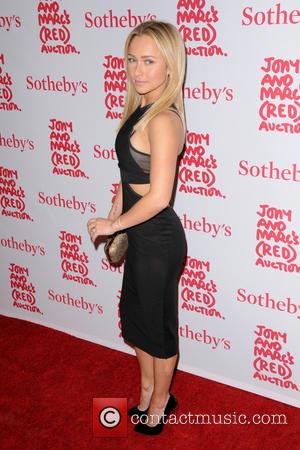 Actress Hayden Panettiere joined fiance Wladimir Klitschko at a protest rally in the Ukraine last Friday (06Dec13) to show their support for citizens demonstrating against his homeland's leaders.

The Nashville star joined her boxer beau in the capital city of Kiev, where protesters have been gathering outside President Viktor Yanukovych's residence, in their bid to persuade the leader to sign a treaty with the European Union.

After Yanukovych announced plans to strengthen ties with Russia instead of making the popular move among his people to move more west, distraught citizens began rallying against the President in November (13), and Panettiere decided to show her support for their efforts.

The actress greeted the crowd by saying, "Good evening, friends," in the native tongue and then continued to address them in English while her fiance translated.

She said, "The beauty of this country is breathtaking: the landscape, the beautiful churches. But nothing compares to the undeniably deep souls of the Ukrainian people. There's a movement happening here, and you have a chance to make things right, to make things just. You have a right to a democracy.

"As an American I want you to know that I stand by you, I support your fight, and I will support it until the country of Ukraine in its entirety reflects the beauty, the true beauty of Ukrainian people. Keep fighting. I love you all."

Panettiere, whose soon-to-be brother-in-law, Vitaly Klitschko, has emerged as a popular opposition leader in the country, isn't the only celebrity showing support of the Ukrainian protesters - George Clooney recently recorded a video message wishing them a "peaceful and safe mission" towards democracy.