Hayden Panettiere feels the 'pressure' of being a role model

Former 'Heroes' star Hayden Panettiere has admitted she feels under pressure to retain her ''healthy'' body image as a role model for ''normal'' women. 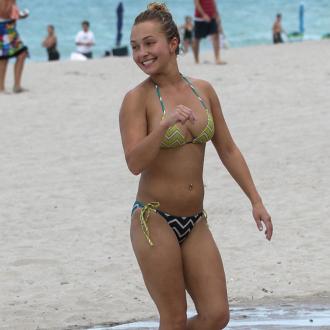 Hayden Panettiere is under ''pressure'' to keep her ''healthy'' bikini body.

The former 'Heroes' actress insisted she feels it is important for her to retain a ''normal'' image because she is cast as a ''role model for women''.

She told FOX411: ''There is a lot of pressure that comes with it. But there's also the pressure to be a good role model for women and have a normal, healthy body.''

However the blonde beauty doesn't mind being a role model, claiming she loves ''representing'' real women with a ''different body type''.

She added: ''But I love being my height and size, and representing a normal girl and a different body type.''

Hayden, 24, doesn't hide her bikini body, and she was spotted on the beach earlier this year revealing that her ''live without regrets'' tattoo was being removed.

According to reports at the time, the star - who is in engaged to Wladimir Klitschko - was photographed showing signs of laser treatment to get the design - which read ''vivere senza rimipianti'', Italian for ''live without regrets'' - removed.

Ironically, the 'Nashville' star had previously discussed the ink, claiming she had to live with the design which was misspelled and should have read ''rimpianti''.

She said: ''It's not that you don't regret things in life, but you at least try to learn from them.

''It's misspelled, too - so I literally have to live by that advice!''