Artist: Hatcham Social
Song title: I Look Like A God When You Dance with Me
Year: 2012
Genre(s): Alternative

Hatcham Social's new single, I Look Like A God When You Dance With Me, will be released on April 9th, with their second studio album, About Girls, getting released on April 2nd. The band will be embarking on a headline tour throughout the UK, to celebrate the release of their new album.

The video for 'Dance With Me' takes place in a 1950's setting, with Hatcham Social dressed up like Teddy Boys and a sulky, gum chewing backing singer. The audience is populated by admiring girls, three of whom meet untimely ends backstage, coincidentally, after members of the band started flirting with them. But just who is murdering the girls?

Hatcham Social has changed their lineup since their formation in 2006. The band now comprises: David Claxton (guitar); Riley Difford (bass) and brothers Toby Kidd (vocals, guitar) and Finn Kidd (drums, vocals). In the time since they've been away, Toby and Finn supported the like of the Maccabees; Pete and the Pirates and Good Shoes on their respective tours. Finn also drummed for Tim and Mark of The Charlatans, on the band's recent acoustic tour. 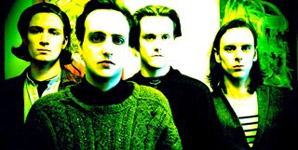