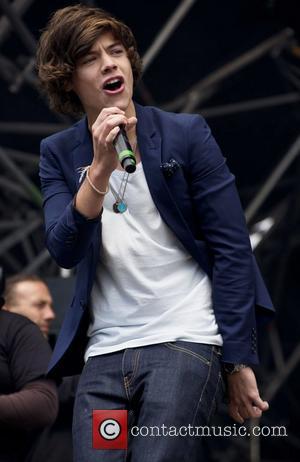 Harry Styles appears to be getting close to Canadian singer Alyssa Reid after the pair reportedly swapped numbers backstage during a recent concert. However, Alyssa says she isn't the kiss and tell type and won't dish on the status of their relationship, reports the UK's Metro newspaper.
Speaking backstage after performing at the Echo Arena in Liverpool on Saturday (July 21, 2012), Alyssa said, "Yes I have introduced myself [to the band]... and I may or may not have got a phone number. But I never kiss and tell. I would never go for a taken man, though, so he must be one of the single ones". Styles and Niall Horan are the only single members of the group, despite the former being linked with a long-list of women over the past couple of months. However, Alyssa quickly began following Harry on Twitter after the gig - and not Niall - therefore we can probably guess who she swapped numbers with. Contemplating how she should make her movie, Alyssa added, "I shouldn't have told you but I would love to cook for him - asparagus-stuffed chicken breast with hollandaise sauce.That's one way to get a man".
Reid rose to fame in 2011, following the release of her debut single 'Alone Again', which samples the chorus from Heart's 'Alone'.

Harry Styles lands UK's most listened to single of 2022