Harry Styles' Tattoo Of A Butterfly – His Worst Yet?

Harry Styles gets a new tattoo

We like Harry Styles; we like One Direction – the little poppy scamps. But one think we can’t abide is Harry Styles’ choice of ink. And his latest – a pretty extravagant butterfly – has to be his worst yet. It’s just massive, and it’s right across his chest. Still, if he wants it removed, we reckon he can probably afford it.

A Tattoo based tweet got the boys in trouble, too. They posted: "Have a real #1D tattoo? Show us! Submit a 90 sec YouTube video to [email protected] and show us why you should be in the @1D3Dmovie!" This didn’t go down well, especially considering 99.99% of their fans are under 18, and therefore unable to get a tattoo within the confines of the law. Just in case you were wondering; we’re the 0.01%. Spokesman Simon Jones said in a statement: "This tweet was posted in error and has now been removed. One Direction do not want to encourage any of their fans to get 1D tattoos." The tweet wasn’t deleted in time though, and received thousands of retweets and screenshots before it disappeared. In less inky, and slightly more positive news, the One Direction boys have been handed waxy tribute at Madame Tussauds. 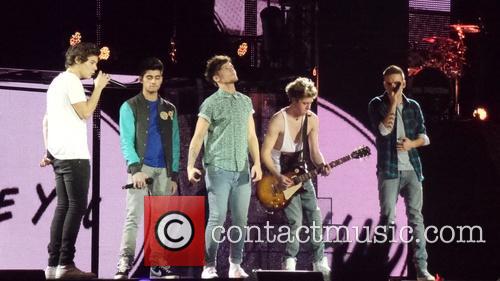 Harry said: “We're just kind of a bit overwhelmed. We've been to Madame Tussauds and seen the kind of people who are in there. It's crazy to think that we will be up there with them.” Zayn agreed adding: “All the biggest stars around the world get these wax figures made of them and why are we, five normal lads, getting these made? It's an amazing honour, really cool and we can't wait to see them.”