Does Harry Styles Have A Penchant For The Older Woman?

One Direction’s Harry Styles is famous for his way with women. He’s young, good-looking and rich, therefore he can pretty much have any girl he wants. Of course, having sampled people his own age, he’s heading to double it.

The lady in question is Rod Stewart’s daughter Kimberly Stewart. The starlet was mobbed by adoring fans – all to young for him – at a Los Angeles Airport after he had allegedly spent the night with the 33-year-old. A source close to Harry said: “He gets on well with many women, and it’s no secret that they are usually older than him. He was on holiday in LA and Rod asked him if he fancied a night out. He said yes right away and he and Kimberly got on very well indeed. The next morning they drove to a Starbucks together where Harry jumped out of the car to buy a coffee for himself and Kim – who was waiting for him,” the insider told the Daily Mirror. “He kept a straight face but looked a little pleased with himself.” The pair were on a night out at to see Rod, 68, play world-famous music venue Troubadour before heading to the Dan Tana restaurant in Beverly Hills.

So does this herald a new era of dating older women for Harry? At 19, he’s either mature beyond his years or rich beyond his years, and we’re pretty sure we know which one it is. Still, at least with the older woman, things can only go in one direction. 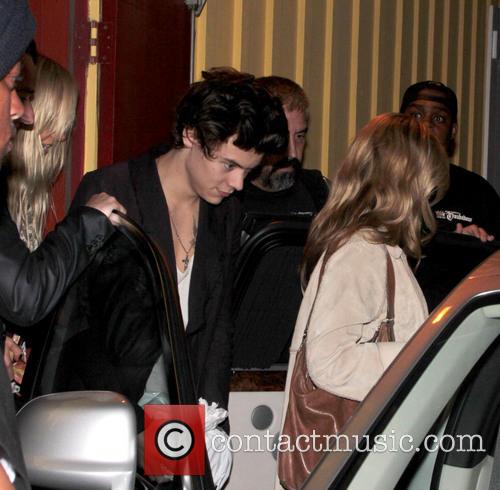 Harry Styles out for dinner with the Stewarts