Harry Styles' Heart Tattoo: A Look At The Popstar's Other Inkings

Harry Styles is almost as famous for his tattoos as his music! With news of his latest heart tattoo, we take a look at some more of his ink.

When fresh faced Harry Styles first auditioned for The X Factor back in 2010 he was a blank slate, primed and ready to be moulded into the shining beacon of boy band perfection that he is today. But nearly four years on Harry’s slate is no longer blank. Not only is it covered with his string of number one hits which he achieved with his One Direction band members, but also in the most literal sense. At 20 years old, Harry is inked up to the eyeballs with tattoos and he’s recently added a new one to the collection. 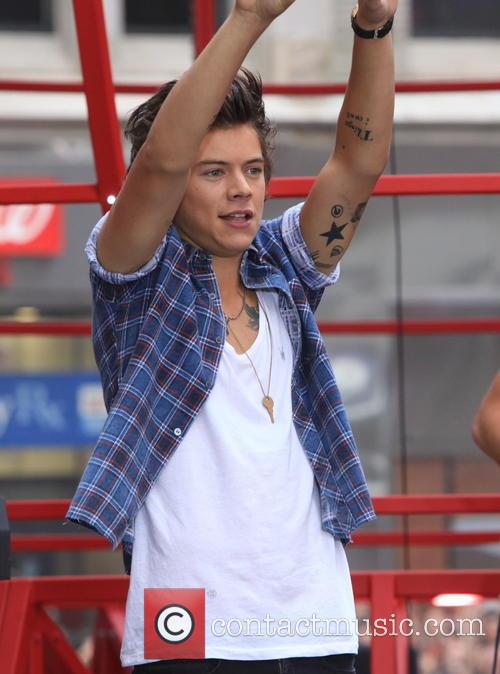 Styles’ heart tattoo, the most recent to be added to his numerous designs, is an anatomically correct rendering of a human heart, aorta and all. Harry added the tattoo to his left bicep on a recent trip to Los Angeles, but what are some other tattoos that Harry has scattered around his very in-demand body?

One of Harry’s less noticeable tattoos is a small ‘A’ on his left arm, which stands for his mum Anne’s name. That’s sweet, but is it as sweet as Jared Leto’s public FaceTime call to his own mother to invite her to the Academy Awards with him?  We love all these famous mummies boys!

Harry is a huge James Bond fan and as such he has a tattoo which reads ‘17BLACK’ near his left shoulder. 17 Black is the roulette bet that Bond lays down in Diamonds Are Forever.

Harry has some smaller tats which include an ice gem cookie, a Green Bay Packers logo and a lightly inked lyric from Temper Trap’s tune Sweet Disposition - “won’t stop ‘til we surrender”.

In 2012 Harry was tattooed with a banner reading ‘Love’ on his chest, but went on to have it inked over in November of that year with two swallows. Harry has admitted that he is a fan of “old sailor kind of tattoos” as “they symbolize traveling, and we travel a lot!”.

On Harry’s hip are the words “Might as well”. Very cryptic, we wonder what this could possibly be in reference to? We don’t think we’ll ever be able to figure it out...

One of Harry’s less subtle tattoos is a gigantic butterfly which he has across his stomach. But this isn’t a throw back to late-90’s dolphin and butterfly tattoos, Harry’s butterfly tattoo is incredibly intricate and almost scientific in its detailing.

On the back of Harry’s left arm he has VooDoo style skeleton tattoo, a pair of hands shaking and the words ‘SILVER SPOON’ just above his elbow.

That’s just a small selection of some of that tats that Harry boasts! Styles fans - do any of you know how many tattoos Harry actually has? Which of his tattoos is your personal favorite?