The Shamrock Parlour may be a favourite of David Beckham, but it has lost service from One Direction star Harry Styles - much to Freddy Negrete's despair. 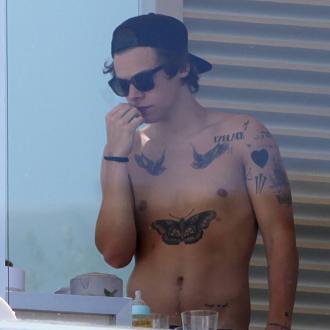 One Direction singer Harry Styles has reportedly stopped visiting his Los Angeles tattoo artist, Freddy Negrete - much to the artist's surprise and devastation. The 19-year-old singer has attended the Shamrock Parlour (a favourite tattoo parlour of David Beckham) several times to be inked, yet it has emerged that he visited a different studio for the rose which was drawn onto his arm earlier in September, 2013.

Related: One Direction Announce Additional On The Road Again Tour Dates For 2015

Negrete spoke to 'The Daily Star' about his feelings of abandonment and betrayal, saying: ''Harry said he would be back. I did his first tattoo and a lot of them since, until the big one when he was here with [ex-girlfriend] Taylor Swift last year. I don't know why he's gone somewhere else now. I didn't do the rose. He didn't even get it here at the parlour. I don't know who did it.'' Negrete referred to Style's last visit in December 2012 with then-girlfriend, Taylor Swift, in which he got a large picture of a ship on his left arm.

Related: Despite Their Stylish Looks, One Direction Insist They're Not High Maintenance

It looks unlikely that the Shamrock Parlour will see Styles anytime soon, however, as he has now left Los Angeles after a short holiday break from One Direction's 'Take Me Home Tour'. Negrete recently heard an interview in which Styles lamented some of his body art, leading to the tattoo artist becoming very nervous and hoping Styles was not referencing his work.

''There are some that my friends have done and some that are just awful" revealed Styles. ''I regret this one on my wrist here. I regret this. I mean, these are just crap!''