Harry Styles says his first kiss at the age of 10 was embarrassing because the girl was much taller than him. 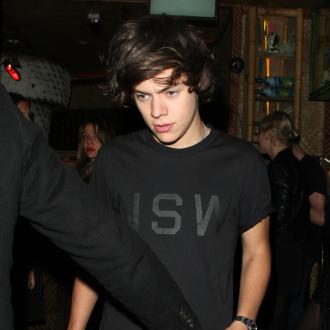 The One Direction heartthrob had his first smooch at the age of 10 but admitted it was quite awkward as his love interest was much taller than him.

He told the Daily Star newspaper: ''The girl was really tall and I was really short.

''I had to get a brick, put it up against the wall and stand on it to give her a kiss because I couldn't reach her face - and there was too much tongue!''

Harry's luck with the ladies has improved and while he was recently linked to 20-year-old model Cara Delevingne, he is said to be besotted with 37-year-old singer Natalie Imbruglia after they both attended James Corden's recent wedding.

A source said: ''Everyone was talking about how Harry was really smitten with Natalie.

''They got on like a house on fire and were clearly very into each other.

''The next morning Harry was given a grilling by the other guests. He was overheard telling one that he thinks Natalie is an amazing woman.''

Harry, 18, and Natalie were greeted by catcalls at breakfast when they arrived at the same time although it is unclear if it was a coincidence or not.