Harry Styles shared cooking tips with Cindy Crawford whilst making pizzas with her children in September. 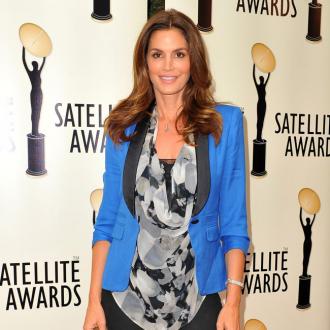 Harry Styles have Cindy Crawford cooking tips when he went to her home.

The 47-year-old supermodel's son Presley, 14, and 11-year-old daughter Kaia enjoyed a pizza-making session with the One Direction heartthrob in September at their house.

During the cook out Harry, 19, gave Cindy some of his valuable expertise that he picked up when he worked in a bakery before finding success as a pop star.

She told V Magazine: ''He stopped by to say hi when my kids and I were making pizzas. My kids were doing their own little pizzas and they couldn't slide them off the pan. Harry goes, 'Well, did you put down enough flour so they wouldn't stick?'

''My husband says, 'How in the world do you know that?' and my little girl chimes in,' Oh, he used to work for a bakery, dad. Everyone knows that.' ''

The 1D hunk stopped by the supermodel and her husband Rande Gerber's abode in Malibu, California, but his impromptu visit was revealed when Presley posted a photo of him with Harry and his sister on Instagram.

In a message accompanying the image, he wrote: ''Thanks for stopping by the house again and helping the boys and I make our pizzas @harrystyles (sic)''

In the interview with V Magazine, Cindy also revealed a lot of her success in her career was down to her trusting her gut instinct.

Cindy - who hosted MTV's modelling reality show 'House of Style' - says it was her first nude shoot for Playboy with fashion photographer Herb Ritts in 1988 that gave her the confidence to take on new projects.

She said: ''It was like, 'I'll try MTV, that sounds cool.' But my agents were telling me not to do it. They said I could make more money doing other jobs. But they were wrong, and 'House of Style' opened a lot of doors.

''When I did Playboy, it was a big deal because I was also in Vogue. I trusted Herb Ritts, which is why I did it. So those things worked out in my favour, and it gave me the confidence to go and do other projects. But not everything worked out! I did a movie that was successful for me personally, but not successful in many other ways.''