Coinciding with its release is a slightly morbid video for the track 'Empty Chair'. It features an ageing man ('with a vacant stare') in a suit leaving his rather empty house with a single suitcase and walking to the coast. Alone on the beach, he drops the case and walks into the ocean. Sufficiently melancholy to say the least, but the lyrics are nonetheless evocative and thought-provoking. The soft harmonies give the track a Simon and Garfunkel feel; an authentically classic twist in Harry Oakwood's contemporary country tunes. That, alongside the use of a mouth organ, adds to its haunting sincerity.

They have already been praised by Australian comic musician Tim Minchin who made an appearance at the band's monthly 'Harry Oakwood Night' at Crouch End in London. He Tweeted: 'If you have a chance to see @HarryOakwood play, take it. That is my directive for the day.' In fact, he was so impressed with Oakwood that he invited them to support him at his sell-out performance at Somerset House.

The band; Andy Harwood, Sam Swallow, James Hayto, Graham Knight and Chopper; remain evasive on being asked who it is they named themselves after, apparently saying: 'We are not at liberty to say.' 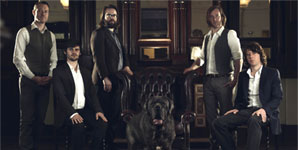