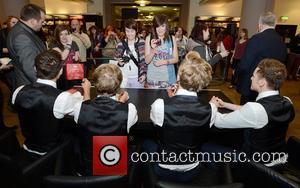 MCFLY star Harry Judd tried to woo Lindsay Lohan into bed by comparing himself to Hugh Grant, but his efforts were ruined when a drunken bandmate stumbled into the room.

The drummer spent an evening with the actress after they met on the set of her 2005 movie Just My Luck, but admits the night got off to a bad start when Lohan began talking about her former lovers at the film's afterparty.

Recalling the incident in MCFly's new autobiography Unsaid Things... Our Story, Judd writes, "We drove to the restaurant, but we hadn't even walked in before Lindsay started reeling off to me all the Hollywood A-listers she'd been with, before explaining that she preferred older men.

"As we sat and ate, she told us all these stories - graphic stories about her sex life, enough to put us off our steaks."

Judd later followed Lohan back to her hotel suite and attempted to charm her by likening himself to bumbling Grant in the romantic comedy Notting Hill, but his bandmate Danny Jones ruined the moment.

He continues, "She was doing everything she could to fuel my ego, telling me how she loved my accent and how she didn't get with actors any more, only musicians. It makes me cringe to think about it now, but I responded in kind.

"This was like Notting Hill, I told her. I was Hugh Grant and she was Julia Roberts. She loved that. Then things started to get a bit more serious. A bit steamier. One thing led to another. We moved from first base to second base, and then, just as I was about to seal the deal, Danny walked in, 'Oh sorry, mate!' For a while Lindsay and I carried on getting a bit frisky but gradually she started to sober up.

"'You've got to leave before eight', she said. I didn't really want to leave. We had unfinished business. But then she announced she was tired, pulled one of those airplane eye-masks over her eyes and went to sleep. So much for my romantic night of passion."