Jimmy Fallon allowed Harrison Ford to pierce his ear so they could wear matching earrings! 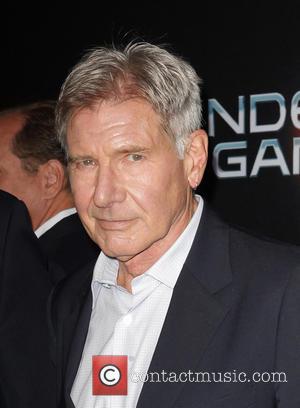 Ford was promoting his new film 'Ender's Game' on the show but things took a different turn when the host let the iconic actor pierce his ear.

Fallon actually asked for this to be done by the 71 year-old but before Ford conducted the piercing, he put on a white lab coat, blue rubber gloves and downed a shot of tequila.

The hilarious segment saw the former 'SNL' star scream, which caused Ford to say "what a puss", but at the end both men had matching red feathered earrings.

At the beginning of the show Fallon told the audience, "because he's one of the coolest people in history and I want to be like him, I've asked Harrison Ford to pierce my ear."

Jimmy continued, "I've never had my ear pierced. I'm very scared for this." The 39 year-old generally seemed worried about what would follow as he said, "What's the worst thing that could happen? Could I get an infection?" Ford jokingly quipped, "Nah. You could bleed to death."

The 'Star Wars' actor spit on his hands in preparation for the piercing and the nervous comedian asked, "We have a gun and a needle, which one would you use?" Ford replied, "I'd say the gun. It's pink and looks like a lot more fun."

Ford's appearance was to promote the upcoming sci-fi thriller 'Ender's Game' which hit theatres in the US on November 1st 2013.

Watch the piercing segment below