Harrison Ford and Calista Flockhart have married in a low-key ceremony in New Mexico. 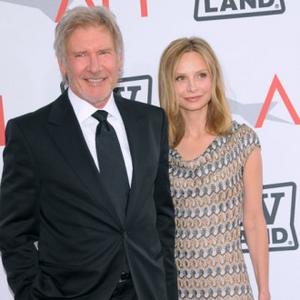 Harrison Ford and Calista Flockhart got married on Tuesday (15.06.10).

The pair wed at the Santa Fe mansion of New Mexico's state governor Bill Richardson - who presided over the ceremony with the assistance of the state's Chief Justice, Charles W. Daniels - following a 16-month engagement, the 67-year-old actor's agent has confirmed.

Governor Richardson and his wife were witnesses for the pair, and the actress' nine-year-old adopted son Liam also attended the ceremony in the southern state - where Harrison is filming 'Cowboys and Aliens' with Daniel Craig.

Harrison and 45-year-old Calista began dating after they met at the 2002 Golden Globe Awards ceremony.

The 'Indiana Jones' actor has been married twice before, with his divorce to second wife Melissa Mathison only concluding in 2004.

Harrison revealed earlier this year he had plans to have an environmentally-friendly wedding to Calista.

Discussing whether or not his wedding would be "green", he said: "I haven't thought about greening my wedding. My wedding was always going to be green!"

It was previously claimed that Harrison planned to adopt Liam once he and Calista had got married.

A source said at the time: "Harrison wants to give Liam his name. He adores him as though he were his own flesh and blood. Harrison is the only dad Liam has ever known.

"There is just one detail Harrison will have to take care of - marrying Calista. She says it is fine if Harrison adopts her boy, but she wants to walk down the aisle first."