With all this talk of Indiana Jones 5, we've taken a look at some of the adventurer's standout back catalogue moments...

Let's face it; the 'Indiana Jones' franchise is one of the most compelling, action-packed adventures a movie enthusiast can go on, whether it's the original trilogy of films or the newer fourth release, which will be followed up with a fifth movie in a few years' time. With that in mind, we've decided to take a look back at the catalogue of action scenes that have almost seen the adventurer himself - played by Harrison Ford - meet his maker...

1. 'Indiana Jones and the Raiders of the Lost Ark' had to introduce its lead hero to fans in a way that would ensure they'd immediately be a part of the action they'd been promised on the big screen. What better way to do that than have Indy running through a booby-trapped temple whilst being chased by a gigantic boulder that crushed anything in its path? It's THE moment everybody remembers from the 'Indiana Jones' franchise, and so we of course had to include it here.

2. After he'd had his treasure stolen from him, Indiana then had to start running once more when an island tribe were ordered to take him out. "Jock! Start the engine!" is one of the most memorable catchphrases from the 'Indiana Jones' series, and watching this incredible run-for-your-life scene explains exactly why that is.

3. Returning for 'Indiana Jones and the Temple of Doom', Steven Spielberg and George Lucas realised they had to keep their legions of fans on board with a pile of more dramatic scenes, twists and turns. Again, they brought viewers right into the action with an opening scene that would have meant a sure death for most people. Being left in a pilotless plane which was dumping fuel over the Himalayas, Indy and his friends narrowly escaped a traumatic crash by jumping out of the airplane on an inflatable raft. Ridiculous for sure, but compelling and classic viewing.

4. Willie had to help out in this one, but allowed her squeamish side to take over when Indy and Shorty were stuck inside a chamber that was slowly descending upon the pair with huge spikes protruding out of the roof and floor. Fortunately for the pair, she managed to eventually pull herself together and get the two out of the chamber just in time, when she found a lever amongst all of the critters and creepy crawlies that were also housed there.

5. Shorty was later forced to save both Indy and Willie from certain death when Indy was brainwashed and Willie was slowly lowered down into boiling hot lava, placed inside a rack which was used for sacrifice. With his quick thinking, Shorty managed to snap Indy out of his psychosis with a burn to the stomach, saving both their lives and Willie's in the process.

6. Introducing Indiana's father in the third movie in the original trilogy, Jones returned for 'The Last Crusade' and escaped death more times than we can count. One of the most memorable is when Indy is faced with a choice that could have easily wiped him out. Drinking from the Holy Grail, he luckily makes the right choice and lives to adventure on another day, saving his father in the process. 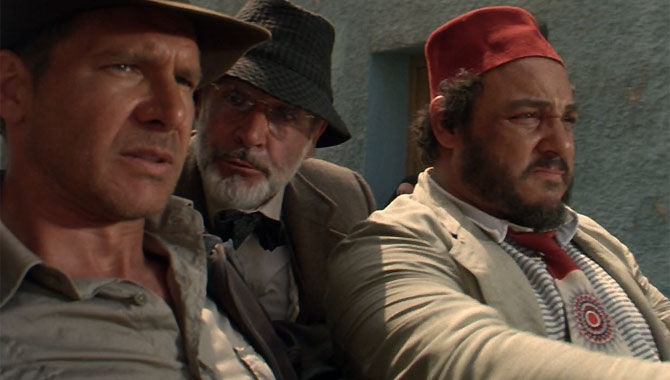 7. From earlier scenes in the same film, Indy is tasked with saving his father from "the belly of that steel beast", otherwise known as a tank. Fighting on the roof of the vehicle, he manages to make every correct decision that allows him to live on, and his father to be rescued. Thank goodness those in the tank were a terrible shot...

8. The film also allows for a hugely emotional scene when the audience were truly punked and Indy was sent careering off a cliff. "I thought I'd lost you boy," his father tells him, before a long embrace. It's not long before he's forced back into action however, despite his climb up the side of the mountain that almost ended his life!

9. Returning to the action alongside Shia LeBeouf in the fourth franchise movie 'Kingdom of the Crystal Skull', Indy is involved in a high stakes car battle on the side of a precarious mountain, where the motor he's sitting in is almost sent careering off the side of the cliff. Though he's survived falling from a height like this before, we wouldn't rate his chances if he happened to slip off again this time! Thank goodness for those monkeys...

10. Then of course we have the motorcycle chase from the same movie, where Indy is captured but saved by Shia's character, Mutt. It's fast-paced action all the way through and we just love it.

The currently untitled fifth 'Indiana Jones' movie will be released on July 10, 2020.