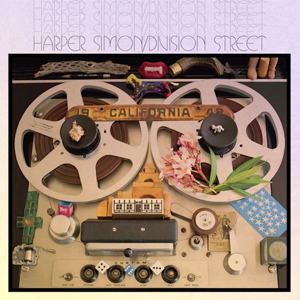 Not that there's anything wrong with having obvious points of reference, and on single Bonnie Brae our man hits the jackpot via those glistery chiming guitars we're suckers for and a brain-hijackingly addictive chorus. It's a high point you sense dad would approve of, but whilst Simon Jr. comes close (on the likes of 99 and the string laden Breathe Out Love), it's one Division Street never quite reaches again. Too often elsewhere the spark that helps them transcend the form is missing, resulting in songs that are perfectly likeable like Chinese Jade and Eternal Questions, but paradoxically don't ask enough of them.

There are exceptions to this inoffensive-by-numbers framework - interesting ones too - that only provide a glimpse of what could've been. Dixie Cleopatra's rumbling fuzz bass and dirtier garage feel kicks sand in the face of most of its neighbours, whilst the briefer and faster Nothing Get Through is a raucous side swipe that walks about like some muscle-bound older brother, pissed off at THE WORLD and taking you along for the ride in his '93 Corvette.

So then. Mummy and/or daddy big in the music biz; Watchya gonna do? In the case of Harper Simon, he's probably making the records so far he thinks they want to hear. To really build his own identity he should think next about making the record he does.