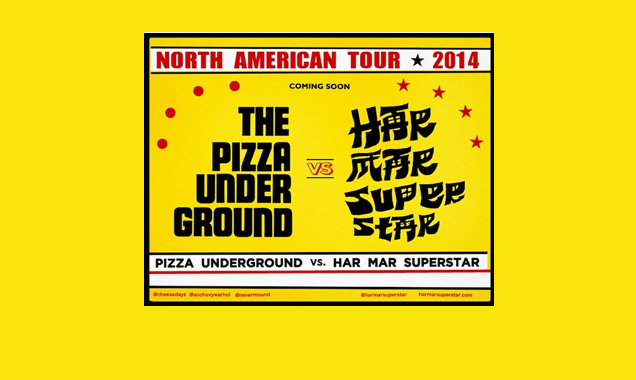 Of the tour, which includes stops in New York, Los Angeles and Nashville, Tillmann says, "I'm very excited to hit the road and share the stage with my pals The Pizza Underground. We're aiming to take you through a magical variety show style experience on your evening out. It'll be a celebration of all things good: soul music, dancing, life, pizza and Lou Reed."

Culkin enthuses, "I don't normally go to concerts, but if I did I'd go to this one."

Released to widespread critical acclaim, Bullett calls Bye Bye 17 "impossibly groovy and infectious." Of the album's first single, "Lady, You Shot Me," Death + Taxes praises, "Har Mar Superstar returns with the song of his career," while MTV Buzzworthy calls it a "Buzzworthy Obsession."Tillmann co-produced the tracks with Jim Eno (Spoon) at his Austin studio with a full live band, before finishing work and remixing the album at Cult Records' New York studios.

Tillmann named his flamboyant alter-ego after the Har Mar mall in suburban St. Paul, MN where he spent his youth watching movies and writing songs about passers-by in the food court. Tillmann explains, "Har Mar Superstar used to be a different person. It used to be my excuse to get away with the more fantastic things in life.it was easier to get onstage as this other guy and be outrageous and have it be glorified. I guess the confidence I got from being Har Mar Superstar translated into my real life so now we're one and the same."