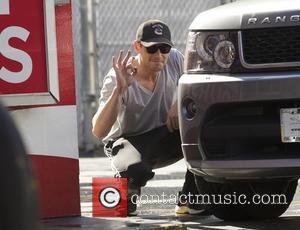 Hanson fans were treated to a surprise performance from Glee star Darren Criss when he gatecrashed the band's rehearsals on Sunday (07Apr13).

The MMMBop hitmakers streamed the session online for fans and introduced Criss to their audience during a comedy skit in which the actor pretended he had been stalking the band and broke into their studio.

Criss joined the trio for a rendition of Get The Girl Back, the first track from the band's new album Anthem, and later took to his Twitter.com page to tell fans about the collaboration.

He writes, "Well that was fun and silly! 15 years in the making, but mission accomplished: Got to sing with (Hanson). Check that off the list," while frontman Taylor Hanson jokes, "(Darren Criss) u (sic) can stalk us... umm, crash rehearsal and guest anytime. You should consider singing for a living."