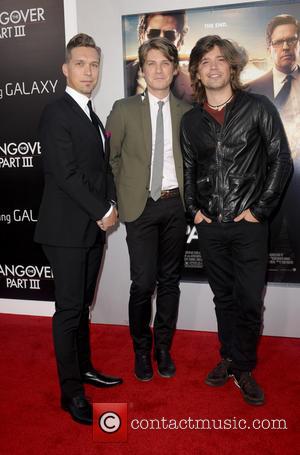 Pop stars Hanson are donating all proceeds from their new beer-branded merchandise to the tornado relief effort in their home state of Oklahoma.

The Mmmbop hitmakers' booze, MmmHops, won't go on sale until the autumn (13), but brothers Taylor, Isaac and Zac Hanson have helped to design brand-related merchandise to raise money for the American Red Cross to help the community in the city of Moore as locals recover from the twister which swept through the area on 20 May, killing at least 24 people and destroying homes and buildings.

Singer Taylor Hanson says, "The tragedy hits close to home, especially since this community was among the first places our band performed together... We are hopeful that the proceeds we can galvanise will play a lasting role in the recovery efforts.

"We have loved bringing people together around music for the last 21 years, and Mmmbop, which inspired the beer's name, is a song about holding onto the friends and moments that count. We want to use this opportunity to make the release of Mmmhops one of those moments".

Hanson, who debuted bottles of MmmHops at The Hangover Part Iii premiere afterparty in Los Angeles last week (20May13), created the beer with tastemakers at Oklahoma craft beer firm Mustang Brewing and will officially launch the beverage in conjunction with their 21st anniversary Anthem World Tour later this year (13).

The siblings are the latest native stars to raise funds for Oklahoma's tornado recovery effort - Carrie Underwood has donated $1 million (£645,000) to the Red Cross, while fellow country singer Blake Shelton is staging an all-star benefit concert in the state on Wednesday (29May13).