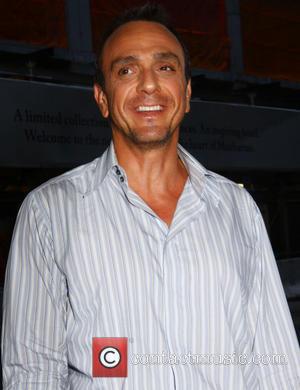 Stars including Hank Azaria and James L. Brooks have paid tribute to The Simpsons co-creator Sam Simon following news of his death on Monday (09Mar15).

The animator, 59, was diagnosed with terminal colon cancer in 2012 and told by doctors he only had three to six months to live. He passed away at his Los Angeles home on Sunday (08Mar15), surrounded by family and friends.

After his death was announced on Monday, many of Simon's co-workers came forward to pay tribute to the talented writer and producer, including his friends at long-running animated series The Simpsons.

Both James L. Brooks and Matt Groening, who developed the show with Simon, shared their condolences, as Groening said in a statement, "We will miss Sam's phenomenal talents, sharp intelligence, and sly sense of humor. He is gone from our industry too soon."

Brooks said in his statement, "He was truly one of the great ones. He found so much outside the work to give him pleasure and left so much behind for others."

Azaria, who has been one of the principal voice actors on The Simpsons since 1989, took to Twitter.com and wrote, "Rest in peace and thank you for The Simpsons, Sam Simon."

Since his diagnosis, Simon, a longtime animal rights activist, had been preparing to give away his $100 million (£62.5 million) fortune to a number of charities, including his The Sam Simon Foundation, which provides service dogs to veterans, People for the Ethical Treatment of Animals (Peta) and other animal-centred organisations.

Peta president Ingrid Newkirk lauded Simon for his tireless efforts for animal rights, noting that it was a "very sad day" at the Sam Simon Foundation.

She added, "I think Sam died with a smile on his face, knowing that elephants were on their way out of the circus, something that, together with the closure of SeaWorld, he dreamt of and talked about all the time. He said the last two years of his life, since his diagnosis, were his happiest, as he used them to help animals who had nothing, and it gave him great joy to see chimpanzees, elephants, and even a 'gay' bull find freedom from harm because he had worked with Peta to get them all out of hideous circumstances."