For Hammock, Departure Songs is where it all comes together. Every disparate strand and sound conjured over the past eight years is no longer separated by song or by album, but layered on top of each other on a release that encompasses and near enough perfects the depth and breadth of the Nashville duo's back-catalogue. 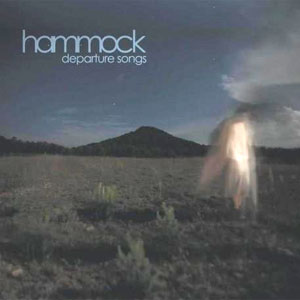 Yes, there are no moments of filed-down, Eno-aping, aching bliss that hit the mark of 'Maybe They Will Sing For Us Tomorrow', and no dream-pop epics that reach the heights of 'Shipwrecked', but Departure Songs from start to finish is a soaring blend of celestial shoegaze and billowing ambience that has the power to transform provincial town commutes into sagas and hangovers into states of nirvana.

That only two tracks of the 19 found on Departure Songs have running times significantly under five minutes is an indication that this is an album in which nothing is cut short, and yet at no point is a welcome overstayed. Most tracks fit between the 5:59 and 6:59 marks, and this feels like the perfect time frame for a band like Hammock, and gives the album a chapter-by-chapter feel; each one just the right length to tell a story without thinning it out and to give a different view without becoming lost in the plot. In this sense, it is the perfect companion to Italo Calvino's Invisible Cities, and shares with it an imagery of mythical landscapes in which the aura is key and not the objects in the foreground.

Produced by past-collaborator Tim Powles, formerly of The Church, it is the echoes of the seminal Australian psychedelic pop band that resonate the strongest, with songs like 'Hiding But Nobody Missed You' and 'Ten Thousand Years Won't Save Your Life' cradled with the same fog of reverb that obscures vocals and half-buries drums. The same lyrical themes are also present; love and loss as a singularity, faith and spirituality, dreams and altered realities; themes that reach out as far as the music does behind them.

'Tonight We Burn Like Stars That Never Die', one of the album's more pulsating moments in which the band approach the territory of those who have pushed such soundscapes into more radio-friendly territories such as M83 or Maps, the couplet "Heaven is in our eyes, tonight we are the stars that never die" is the kind of wide-eyed refrain the equally grandiose Hope Of The States used to throw out with wild abandon and often induce a quiver or cringe, but in Andrew Thompson's sighs they sound triumphant as the guitar squall slowly gives way to strings and horns.

What Hammock do so well is take motifs and ideas that may not be unique, and are certainly not without precedent, but are freed from the rigidity and pretensions of their predecessors. Whilst hundreds if not thousands of bands have borrowed from the synthetic psychedelic electronica of the eighties and the pedal-obsessed shoegaze of the early nineties virtually none have done so with such ambition and a definitive direction that disregards the typical connotations of said scenes. It is something that cannot be portrayed exactly in word; only in the mystical and, for want of a better term, 'wholesome' nature of their music. Like meditation or a drugs trip, words are no replacement for experience.

Even outside of its name Departure Songs has the feel of a farewell, and whether it sees the band bow out, take a new direction or merely continue on the same path, it is the culmination of one of music's most breath-taking journeys.