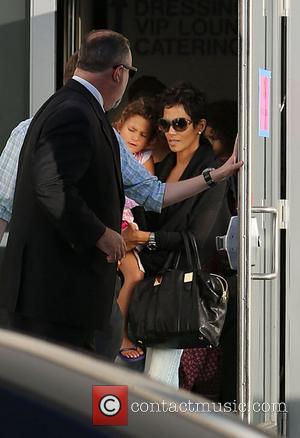 Halle Berry's current fiancee, Olivier Martinez, and he ex-beau and father of her daughter, Gabriel Aubry had an enormous fight last Thursday (22nd Nov. 2012), Thanksgiving, of all days, which left both men in hospital and later in the police station. Furthermore, since then, both parties having taken out protective restraining orders against each other and each are waging entirely different stories against one another.

TMZ broke photos of Aubry's face which really has been beaten to a pulp. Ironically, this entire dispute is in aid of love for Nahla, Halle's daughter. Halle had been trying to get full custody of their daughter, wanting to emigrate to Paris with Martinez. Naturally, the father, Aubry, was having none of it and the court granted in favour of Aubry, ordering that Nahla had to keep residence in the USA.

Halle Berry isn't the first celebrity to have a very public and very messy custody battle. Back in 2006 when Britney Spears had her 'wobble' she and her then husband Kevin Federline had an enormous dispute over their two boys, which unusually lead to the father, Federline, having full custody. Not in the least surprising given Britney's behaviour at the time. Pamela Anderson and Tommy Lee's custody battle was also bloody, as Pam accused Lee of being an abusive drunk and that he knowingly gave her Hep C, which remains unproven. Earlier this year Kelly Rutherford, of Gossip Girl fame, had her children taken from her as her ex Daniel Giersch was given custody and took her children to France where he lives, as ABC reported at the time.

With the further drama of the Thanksgiving fight, it looks as though Halle Berry's custody battle may go on for a lot longer and will only get more complex. We simply hope that Nahla's best interests are kept at the heart of the cause.