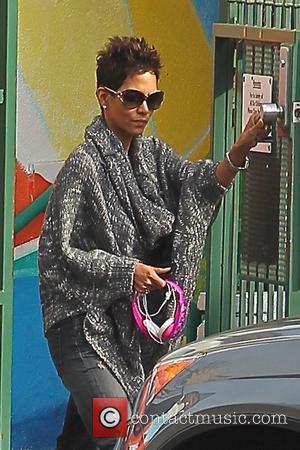 One of Los Angeles' top child psychologists has urged Halle Berry to seek out a therapist for her daughter to help the four-year-old process the family tensions which culminated in a fight between her dad and her mother's fiance on Thanksgiving Day (22Nov12).

Gabriel Aubry and Olivier Martinez found themselves brawling outside Berry's Hollywood home during a confrontation over ongoing custody issues, which the French actor claimed had cost him and his girlfriend $3 million (£1.9 million) in court and legal costs. Both men were hospitalised after the violent altercation.

Berry's aides insist Nahla didn't witness the fight and has little knowledge of the legal war related to the actress' plans to relocate to her fiance's native France with her daughter.

However, revered child and family psychotherapist, Dr. Fran Walfish - the author of The Self-Aware Parent, tells Wenn, "The drama will have raised her anxiety. No doubt about that. Add to that, the police came in uniform with guns in holsters and made an arrest. This is a very scary and traumatic event for a young four-year-old child. Anxiety is a psychological term for fear.

"It is quite possible that the adults were screaming, angry and frightened, as well. Kids have laser-sharp radar into their parents' emotional states. The entire scene may have been fuelled for this child by the cues she picked up from her mom and dad.

"Nahla would benefit greatly from child therapy... Most parents forget that when a child's life becomes chaotic and filled with conflict the child feels angry...When a young child witnesses raw aggression, they have only two ways to go - they either become depressed or they identify with the aggressor and become a bully with acting-out behaviours.

"A sensitive well-trained therapist can help Nahla deal with these powerful emotions in a safe place outside of her family while developing a stable longterm relationship based on trust."