Halle Berry To Appear In The Simpsons

Halle Berry is to make a guest appearance in an Oscar-themed episode of animated show 'The Simpsons'. 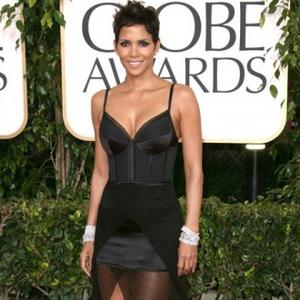 Halle Berry is to make a guest appearance in 'The Simpsons'.

The actress has provided her voice for an Oscar-themed episode of the animated show, in which a cartoon version of herself will wear the famous red dress she donned to accept her Academy Award in 2002.

In the story, entitled 'Angry Dad: The Movie', Bart Simpson's cartoon about an aggressive father is turned into a film and wins huge critical acclaim.

The movie wins a Golden Globe, presented by Russell Brand (voiced by himself), but Bart's dad Homer races up to the podium ahead of his son and gives his own acceptance speech.

The movie's winning streak continues and Homer takes credit at each ceremony so when it's nominated for an Oscar, Bart keeps it quiet from his family.

But Homer and wife Marge arrive at the ceremony just as Halle is presenting the statuette to Bart and after his fellow nominee Nick Park helps him realise that filmmaking is team effort, Bart gives his father some credit.

Speaking about Halle's cameo, screenwriter Al Jean told TV Guide magazine: "Halle starts talking about herself as she's presenting. She ad-libbed something she actually dreams about at night that we left in.

"We always ask the subject to give us a photo they'd like us to work off, and then we give the character an overbite. It's hard to make Halle Berry look bad."

The episode airs in the US on February 20.