Halle Berry Rushed To Hospital After Accident On Movie Set 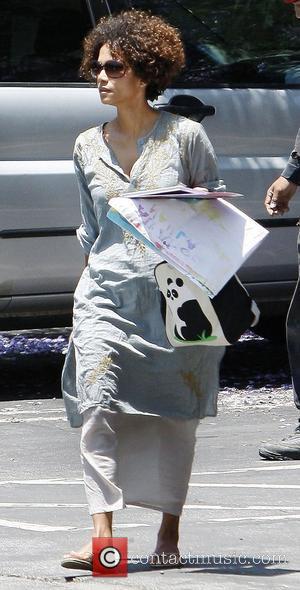 Halle Berry has reportedly been rushed to hospital in Los Angeles (July 17, 2012) following an accident on the set of her latest film. Berry is currently filming for The Hive, with Abigail Breslin, scheduled for release in 2013. According to The Mirror, Halle either hit her head on concrete after falling to the floor, or she was hit on the head with an object. There's no word from her reps so far, meaning that the details of the incident are currently unclear.
The actress was reportedly taken by ambulance to Cedars Sinai Medical Centre at around 10pm. There have been no reports on her current condition but it is thought that the film set was shut down for the evening. Ironically, in the movie, Halle plays the role of a 911 emergency operator, who takes a call from a young girl who has been abducted. It seems as though Halle's not having much luck recently - she is currently embroiled in a fierce custody battle with her ex, Gabriel Aubry, from whom she has separated. Halle seemingly wants to take her daughter Nahla to France to live with her and her fiance Olivier Martinez (Kylie Minogue's ex). Gabriel won't be giving up easily though, by the looks of things.
Last week, Kristin Chenoweth suffered a similar accident, when she was struck on the head by a lighting rig on the set of The Good Wife. Witnesses to the accident admitted that they had feared she might be dead.