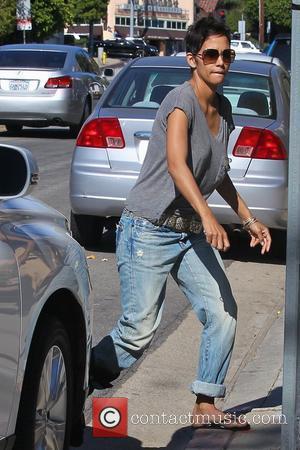 Halle Berry has been interviewed by officials from Los Angeles' child protective services over allegations her ex-boyfriend Gabriel Aubry endangered the welfare of their three-year-old daughter.
Former nanny Alliance Kamdem, hired by both Berry and Aubry, filed a police report against the model last week (ends22Jan12) after she was reportedly shoved against a door while holding the couple's daughter, Nahla.
The incident occurred after Kamdem challenged Aubry over his decision to keep the tot at home and not take her to school because of an illness.
Cops have listed the altercation as a battery and Kamdem tried unsuccessfully to get a protective order against Aubry in court on Tuesday (24Jan12).
In her petition, the child minder claimed she feared retaliation from the model after listing a number of other instances when he is accused of behaving "violently" around his daughter.
Describing a recent trip to Spain, where Berry was filming on location, Kamdem alleged Aubry would "walk over and violently grab/take Nahla away from me", while she cites another incident last June (11) when she was also reportedly pushed out of a door.
Her statements have prompted representatives from the Los Angeles County Department of Children and Family Services (Dcfs) to question both parents about Nahla's care, and they paid a routine visit to Berry's home on Wednesday (25Jan12), reports Tmz.com.
Aubry is expected to be questioned by Dcfs officials later this week (begs23Jan12).
Berry was in court on Tuesday to ask a judge to ban Aubry from contacting their child until the police investigation into Kamdem's allegations had been resolved. A decision on the order has been delayed until next week (begs30Jan12).