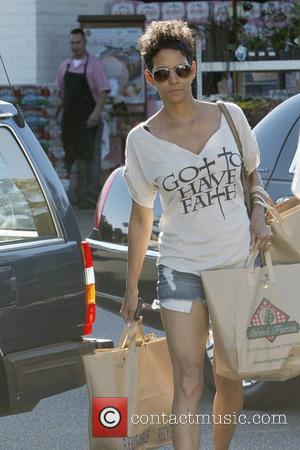 Halle Berry stopped by Jay Leno's Tonight Show this week to talk up her new movie Cloud Atlas, an adaptation of David Mitchell's epic novel of the same name. The ambitious film - by the Wachowski's - chronicles a story across five centuries, set in six separate timelines.

One scene in the movie sees Berry's character smoking marijuana with Tom Hanks, which prompted Leno to ask the actress if she was partial to a smoke now and again. Berry claimed she was "not a pot smoker," though Leno asked "Have you smoked pot with Tom Hanks?" with Berry carefully conceding, "I smoked pot with Tom Hanks in this movie." Berry and Hanks play different characters in each setting, though each story manages to connect in innovative and magical ways.

The film opens nationwide on Friday (October 26, 2012) and has been quietly praised by critics, though it remains to be seen whether or not it will contend for the major film awards. We predict it will get a few obligatory nods (this year's Extremely Loud and Incredibly Close) but won't win a thing. It stars Hugh Grant as a futuristic cannibal for god's sake.