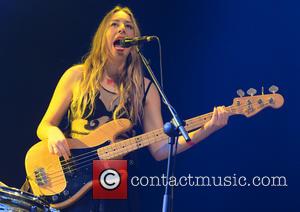 Haim rocker ALANA Haim beamed with delight during the band's set at the Lollapalooza festival in Chicago, Illinois on Saturday (03Aug13) when a fan threw a bra at her.

The keyboardist took to the stage with her bandmates for a rousing set, and a female fan showed her appreciation by removing an item of underwear and hurling it at the group.

Picking up the lacy garment, which was daubed with the cheeky message "I will always support you", Alana giggled and told the crowd, "Oh man, it's a B (cup). Like me! We match! Itty bitty titty committee, girl. I feel you."