Haim's second album, 'Something To Tell You', will be unleashed in July.

Nearly four years after they burst onto the scene, Haim are finally set to deliver their long-awaited second album, revealing details of its release as well as unveiling a brand new single, ‘Right Now’.

The three Haim sisters – Este, Danielle and Alana – have been teasing the release of their sophomore effort over the last few weeks, sharing live performance fragments over Instagram and combining that with a series of billboard adverts around the world. 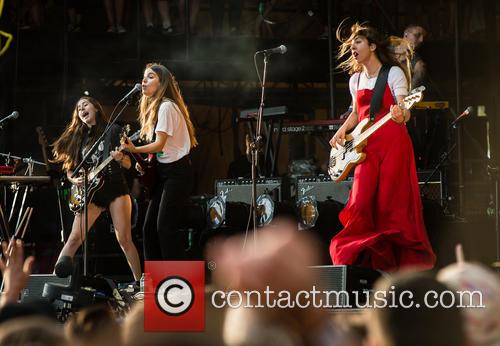 Finally, on Thursday (April 27th), a date they had teased over their social media channels, Haim announced that the new record will be called Something To Tell You and will be released on July 7th via Polydor.

Furthermore, they unleashed the live video for their new record’s first single, titled ‘Right Now’. It is directed by the acclaimed Paul Thomas Anderson, who has worked with prestigious bands such as Radiohead and was in charge of Boogie Nights and There Will Be Blood. The single itself, and its music video, will be officially released on May 3rd.

In an interview earlier this year, the band promised that their upcoming record would consist of “classic songwriting, but also modern, exciting and fearless” music.

Explaining the lengthy wait in between records – their debut Days Are Gone was released way back in September 2013 – bassist Este Haim said: “We write and produce everything ourselves, we don’t have writers sending songs via e-mail.”

At the same time, Haim announced a number of festival appearances in Britain this summer, including the Reading and Leeds Festivals and Radio 1’s Big Weekend, in which they’ll feature alongside Lorde and Lana Del Rey.