Review of Days Are Gone Album by Haim

There has been a lot of buzz surrounding Haim ever since they released their debut EP 'Forever' in early 2012 and topped the BBC Sound of 2013 poll. Hailing from California, the three sisters that make up Haim have produced a superb debut album, certainly living up to the hype. 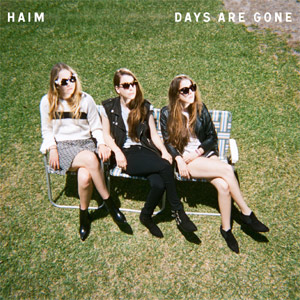 The first three tracks will already be familiar to fans, with the opening 'Falling' being one of the strongest tracks on the album and setting a strong precedent for what's to come. Starting an album with previously known songs may be a bit of a disappointment to those fans who already know them inside out, but they're far too good to be skipped and serve as a reminder of how fantastic this band are. The only shame is that they've gone into the studio and re-recorded track number three, 'The Wire'. The original version put out by the girls was far more raw and stripped back, which would have been nice to see on a debut album.

'If I Could Change Your Mind' is thus the first unknown track on the album and, while the beat is actually relatively upbeat, the lyrics describe the pain of letting a loved one go. The band is often described as indie or soft rock, but here the R&B and pop influences are clear to see. This is by no means a bad thing, but it can give listeners an idea of where the rest of the album is going in terms of style.

The next song, 'Honey & I', is probably the only weak track on the album. While 'The Wire' would've perhaps been better with less studio editing and a more understated tone, the exact opposite is needed for 'Honey & I'. It's devoid of the typically big Haim choruses, and it progresses relatively monotonously compared to other Haim tracks. Towards the end, it picks up, but it ultimately doesn't fulfil the potential that's bursting to reach the surface.

One of the highlights of the album is the title track 'Days Are Gone'. It was co-written with Jessie Ware and Kid Harpoon which explains both the folk, electro and synth elements infused into the song. It also sees the vocals being led by Alana Haim, as opposed to Danielle, which shows how versatile and united the sisters are. Danielle may be the typical front girl but everyone steps up to the mic at some point during the album. The girls are clearly very talented, with all of them credited with writing on every track, and all playing their own instruments.

Musically, the most interesting song is 'My Song 5'. There is so much going on and it's a real glimpse at how bizarre yet wonderful the band can be. It's an angry song, depicting unfaithful and lying men but it's the beat that conveys the real anger with its deep, crackling bass line that only ceases momentarily midway through the song.

What is so clear with this band is how much they love their music as well as performing and sharing it with their fans. Este Haim recently said in an interview with XFM that she was so desperate for the album to be heard that she 'threatened to leak it to the powers that be at our label and they weren't very happy about that'. Nearly every song on the album sounds like it's been recorded in a room exploding with passion, love, emotion and energy and it comes across beautifully. These sisters are certainly living up to their namesake. Their surname, after which the band is named, means 'life' in Hebrew, and they've collectively injected the music world with a massive dose of it.