Haerts Hid Behind An Alias For Their Daunting First Show

The band covered all bases when it came to transferring studio material to the stage.

Brooklyn four-piece Haerts may have clicked together like pieces in a puzzle, but that didn't stop them being nervous about their first show. The band recall their reluctance to let people hear them play back in 2012. 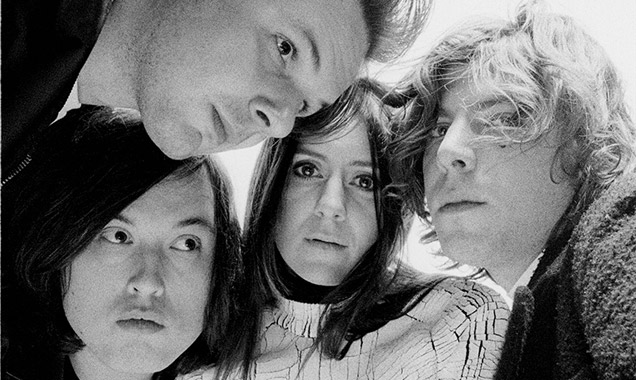 Haerts never intended to be a live band

Nini Fabi and Ben Gebert had been friends living in Germany from a young age before they emigrated to the US in order to pursue a music career. 'Our friendship began when we were 13-years-old', says Ben. 'We've just always been writing and playing music together.' Nini recalls meeting bass player Derek McWilliams in New York City before being introduced to Garrett Ienner by their manager, but she admits they'd never intended to bring their music to the stage.

Watch Haerts performing 'Be The One' live here:

'Our first show that the four of us played together was about two years ago. We played under a secret name because we didn't want anybody to come', the band confess. Instead, they took on the name of an Austrian beer company, Stiegl, as their live pseudonym, with the wise assumption that their first show would probably flop. 'I think when you do your first show you're so concerned with what's going on on stage and controlling that so it's not as free as the shows now', Nini reflects.

Haerts unveiled their self-titled debut album in October 2014 having signed to Columbia Records, and later released their first single from the record, 'Giving Up'; an ironic title for a band that was just starting out. They'd already received airplay from their 'Hemiplegia' EP tracks 'Wings' and 'All The Days', and now the hype surrounding them was spreading like wildfire.

Luckily, these guys are happy to perform live these days and have just completed their December run of North American dates including a sold out show in San Francisco.

Haerts Hid Behind An Alias For Their Daunting First Show