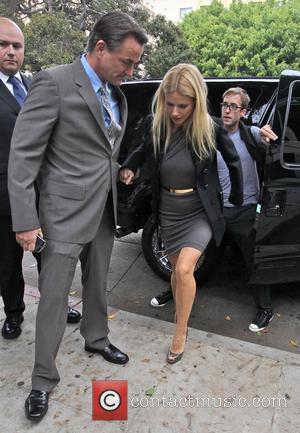 Gwyneth Paltrow and her COUNTRY STRONG co-star Tim Mcgraw became the butt of Brad Paisley's jokes as the singer/songwriter co-hosted the CMA Awards in Nashville, Tennessee on Wednesday night (10Nov10).
The Celebrity star spotted the actress in the audience at the Bridgestone Arena, waiting to perform the theme song from her new movie and decided to have a little fun.
Paisley quipped, "Gwyneth, I've always wanted to ask you something - can you get me two Coldplay tickets?"
Co-host Carrie Underwood added, "Don't be rude. Can you make it four?"
The gracious former American Idol winner then paid tribute to the actress for having the courage to perform at the CMAs, stating, "We are very thrilled to have you here with us. It takes a lot to come to our town and get up and sing on our stage."
Joker Paisley then added, "That's true. None of us country singers would ever have the nerve to just go to Hollywood and think for a second that we could instantly become a major motion picture star - right Tim?
"I'm sorry, Tim couldn't be here tonight; he's on location filming Avatar 2."
A photo of MCGraw in what he would look like as an all-blue Na'vi tribesman in the film then appeared on a huge screen above the stage.
MCGraw did actually make the trip to the awards show - he handed out the night's final award for Entertainer of the Year to a shocked Paisley.