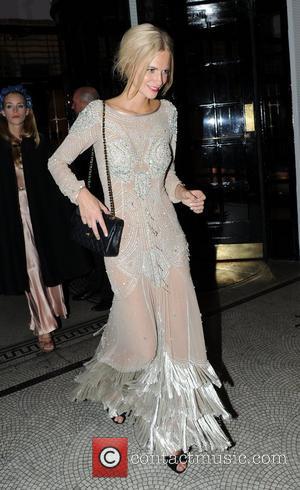 Gwyneth Paltrow, the Oscar-winning American actress, celebrated her birthday in New York on Tuesday (27th September 2011), but paid the price the following morning. The 'Contagion' star complained of a 'horrific hangover' at Jfk International Airport on Wednesday.
Paltrow had told Twitter followers on her 39th birthday, "Thank you for all of my happy birthday wishes, just read so many...you guys make my life great, thank you". The actress reportedly partied with family and friends that night, but told followers the next morning, "Nursing a horrific hangover at the jfk. Nothing like starting an overseas flight dehydrated.Where is the dog? I need the hair". Her 'Contagion' co-star Ali Wentworth teased the actress, saying, "Happy Hang-over!!!! Heard it was Crazy! Next year Paris!", with Paltrow replying, "I was over-served. It's not my fault. Or is it?" It is not clear whether Gwyneth adopted the hangover cure routine she revealed to Closer Magazine in May, saying, "I take a cold shower in the morning and then I go into the sauna and drink a lot of water throughout the day.Green tea also helps!".
Paltrow is currently shooting the comedy movie 'Thanks for Sharing', with Mark Ruffalo and Tim Robbins. The movie centres around three people undergoing 12-step treatment for sex addiction.