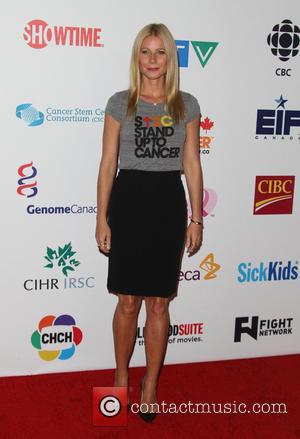 Gwyneth Paltrow, Halle Berry, Jennifer Aniston, Rob Lowe and Reese Witherspoon joined forces on Friday night (05Sep14) to raise money and awareness for the Stand Up To Cancer charity at a star-studded telethon.

The fourth biennial event, broadcast live in the U.S. and Canada from Los Angeles' Dolby Theatre, featured a slew of famous faces, including Kerry Washington, Jon Hamm and Mike Myers, calling on viewers to give generously to the organisation in order to continue supporting research into groundbreaking new cancer treatments.

However, one of the most touching celebrity appearances of the night came from former James Bond star Pierce Brosnan, who recalled losing his first wife, Australian actress Cassandra Harris, to the disease in 1991, followed by his stepdaughter Charlotte last year (13).

Addressing the audience, he said, "To watch someone you love have his or her life eaten away, bit by bit, by this insidious disease, that kind of sorrow becomes an indelible part of your psyche.

"I held the generous, strong, beautiful hand of my first wife, Cassie, as ovarian cancer took her life much too soon. And just last year, I held the hand of my funny, wonderful daughter Charlotte before she too died from this wretched, inherent disease."

Thyroid cancer survivor Sofia Vergara also gave a moving speech towards the end of the hour-long show, urging audience members to shine a light for loved ones battling the disease as she and Kevin Bacon introduced the event's closing performance from rappers Lupe Fiasco and Common and singer Jennifer Hudson, belting out their new cancer survivors' anthem, Remission.

Dave Matthews, Ariana Grande and The Who, via satellite from London, also performed during the telethon.

But the night didn't go quite as smoothly as planned - a live link-up with Ben Stiller from Toronto, Canada had to be axed at the last minute due to a technical problem, prompting presenter Mike Myers to quip, "Evidently, lightening has struck something in Toronto, because I am doomed never to have a live telecast without controversy. I think it's Hurricane Kanye has hit Toronto... (sic)".

The Austin Powers star was famously left dumbstruck back in 2005, when he stood by as rapper Kanye West notoriously lashed out at then-U.S. President George W. Bush in the aftermath of Hurricane Katrina, declaring, "George Bush doesn't care about black people" during a live Tv fundraiser to help the victims of the New Orleans, Louisiana natural disaster.