Gwen Stefani thinks parenthood can be ''overwhelming'', especially as her sons are getting older as it's tough trying to juggle everyone's needs. 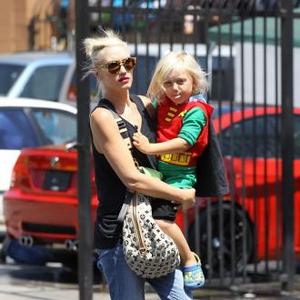 The No Doubt singer has two sons, Kingston, six, and four-year-old Zuma, with husband Gavin Rossdale and while she loves being a mother, she admits it's tough trying to juggle everyone's needs.

She said: ''When you first have a baby your life doesn't change. I mean, you have a little less sleep and you drag these cuddly things around you and it's just amazing.

''But you still get to be you. Once they get to, like, five, six and school and it starts to get, like, 'Wow, they got real problems. They're my responsibility.' Oh my God. That is overwhelming.''

Gwen, 42, also admits that while she loves having Gavin at home to help with the children, it can be ''hard'' because it interrupts her routine.

She told Britain's ELLE magazine: 'I've been with Gavin for 14 years, and, let's face it, that is a huge accomplishment. I feel so proud of that - it hasn't been the easiest Journey.

''He's home now for, like, seven days, so just him being home makes everything different. In a good way. But also in a hard way because it changes everything.''

Is Blake Shelton Planning To Propose To Gwen Stefani?