Gwen Stefani's Budding New Romance With Blake Shelton Is Already Influencing Her Art After The Stars Teamed Up To Write A Country Song Together. 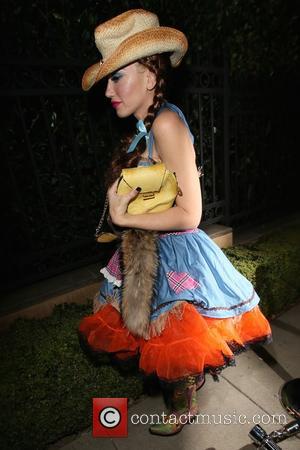 The singers, who met after working as mentors on U.S. reality show The Voice, confirmed rumours about their relationship on Wednesday (04Nov15) after they were photographed getting close while partying together over Halloween (31Oct15).

The speculation emerged almost four months after Blake announced his divorce from Miranda Lambert, while Gwen split from her husband of nearly 13 years, Gavin Rossdale, in August (15).

Now it has been revealed the musicians have been hitting the studio to make sweet music together, and the resulting mid-tempo ballad is a departure from Gwen's usual rock/pop sound.

"It's amazing how good she sounds on a pretty country song," a source tells People.com. "And it sure is good to hear Blake singing real country again."

The insider claims the track is about a broken relationship, but it has yet to be cut.

Gwen and Blake's chemistry has long been evident on the set of The Voice, where the couple has been flirting with one another for some time, and earlier this week (begs02Nov15), the No Doubt frontwoman tried to laugh off romance questions in an interview with Los Angeles DJ Ryan Seacrest. However, she did admit to fancying Blake, saying, "I do think he's hot, don't you?"

Once the news of their relationship became public on Wednesday, the pair didn't waste any time in making its first public outing together in Nashville, Tennessee. Blake attended the Country Music Association Awards solo, but he was photographed holding hands with Gwen as they arrived at the Warner Bros. after party.