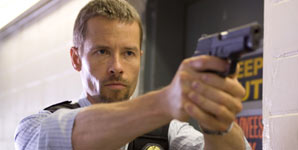 Guy Pearce talks to contactmusic.com about his new film Traitor.

Traitor, in cinemas on March 27, is a tense worldwide thriller that follows the account of Samir Horn, a mysterious person in the middle of a web of connections to dissident terrorist organisations. Horn's connection in a succession of high profile bombings speedily attracts the interest of straight arrow FBI agent Roy Clayton. Being a man devoted to uncovering the truth, Clayton must embark on a assignment to track Horn's whereabouts across the globe in order uncover a story full of shadows, conspiracy and intrigue.

Q: Hi Guy. You are notoriously selective when it comes to signing on to films. Why did you agree to star in Traitor?
Guy Pearce (GP): One of the major reasons was Don Cheadle. He had already signed on. He's a thinking guy. He picks great roles and was also a producer on the film. Even though we didn't have many scenes together, I dealt with him as a producer a lot. He's just a really smart, sensitive guy and was determined not to make the film a typical, heady, political story.

Q: You are an Aussie, but in Traitor you have a strong accent from America's south. Was that hard to pull off?
GP: Not really. I have a great dialect coach who helps me. He travels a lot and interviews people from different regions so has this huge library of tapes of different accents. I called him up and told him about my character, so he sent me a couple of tapes that I was able to use.

Q: And what about research as far as the FBI or CIA? Did you meet any agents?
GP: Not really. We had an FBI expert on the set who we were able to reference from. There were also a few books I read. The thing I really wanted to examine was the bad communication between the FBI and the CIA. That's something that's prominent in the script. I think it's also one of the major problems in the world - bad communication between nations. I scanned through a few books and it seemed that, when there was a problem, it could be related to bad communication. You know, someone didn't tell this other person something. Once I got a sense of that, I let the research go. I don't really like to do it. I like to rely on the script. Jeffrey (Nachmanoff) is obviously an intelligent guy and a great source of information.

Q: The film does provide plenty of insight into the inner workings of terrorist groups.
GP: Yeah. If I have to do a lot of research for a film, it is usually because there's something missing in the script. In this case the script was so detailed and the information I needed was very much there. But, having said that, I did go and buy a bunch of books on the FBI and the CIA on terrorism. I'm not a great reader, so I delve in and grab a few snippets, but I also think it's up to the screenwriter to do all of the hard work and it's my job to bring it to life (laughs).

Q: There's some quite frightening terrorist plots in Traitor. Did it make you open your eyes a little wider?
GP: I think terrorists have probably imagined every possible scenario. I know I have. But, I tend not to fall into the trap of the fear thing. I think there's certain members of this (US) government, anyway, who try and keep everyone frightened. But, having said that, the point of terrorism is to terrorise people. But, I do think by perpetuating the fear, you're never going to manage to solve the issue ultimately. As we discussed, one of the issues we analyse in the film is the bad communication and I think that is one of the major problems in the world.

Q: You said you don't fall into the trap of the 'fear thing'. What do you mean?
GP: Yeah. I try not to fall into the 'I'm a victim. I may be the victim of a terror attack at any point'. If someone is going to blow me up, there's nothing I can really do about it. I haven't experienced anything like that so it's probably naive of me to say. If I was in the London Underground and I saw 20 people get blown to bits, I may have a bit of shell shock and be screwed for the rest of my life. It's easy to just talk about it as an idea at this stage. It's what the film tries and gets into in a way.

Q: Have you heard from any FBI, CIA or Washington DC officials who have seen an early screening of Traitor?
GP: We actually had a screening in Washington the other day and someone stood up after the film and said 'Why are all the Muslim people in the film extremists?' Jeffrey said 'Well that's not the film we're making'. In actual fact, the character Don plays is Muslim and isn't an extremist. He's the central character. But, it's a touchy subject and it will be uncomfortable for some people for different reasons. But I think it's brave for Jeffrey to take the issue on.

Q: Well, the film is not your typical action thriller where the central figure is perfect.
GP: That's right. It's what attracted me to the project because it is unique from its viewpoint. I think if it had been made at a big studio, Jeffrey probably wouldn't have had the freedom to make it how he wanted and tell this story. I probably would have had more chance of playing Don's character than Don. So, I think there's a brave quality to the film I found appealing.

Q: Your character has a beard. Was that your choice because we're used to seeing you quite clean cut.
GP: Yeah. I wanted to make sure I didn't look preppy, clean cut and how I looked in LA CONFIDENTIAL. I wanted him to be tough on some level. I didn't want him to be the sensitive, good cop, cliche.

Q: Some people may be surprised Steve Martin, the comedian, was the person who first come up with the story idea for Traitor.
GP: Yeah, it seems surprising.

Q: Did you have much interaction with Steve?
GP: No, not at all. Jeffrey dealt with him a lot, but I have met Steve before. Funnily enough, I did meet Steve many years ago because his wife was working on a TV show in Australia I was involved with. He was out in Australia and did a workshop of one of his plays. But, it would be interesting to talk to him and see how much his original idea had changed.

Q; You seem to pick projects that require you to travel to quite exotic locations. For Traitor, you were in Morocco, France, London, Canada. You must like traveling.
GP: Yeah (laughs). It seems so (laughs). After I did this film and another film in LA, an Adam Sandler comedy, I actually travelled to Turkey for a vacation with my wife and some of her friends. It was a little weird because I'm usually traveling for work so when I should have been relaxing in Turkey I was like 'OK, what do I do know? Where's my schedule?'

Q: How do you pick you roles? You tend to avoid the big Hollywood films, instead going for interesting independent films.
GP: That's true, although I did do the Adam Sandler movie which was a lot of fun. I like to be involved in things that make people think. I do read scripts and just go 'Ohhhh. I'm bored' so I won't pursue it.

Q: How do you work out whether a director is the right one for a project. You live in Australia so often you probably have to discuss a potential project with a director over the phone.
GP: Yes, that's very true. I think it's an instinctual thing. Often it is one or two discussions over the phone or maybe a meeting or two. I spoke to Jeffrey only a couple of times before I agreed to do the film. I have become better at asking a series of specific questions and seeing how they respond. But, instinct is very important. You need to know they will push you and you will push them.

Q: What's next?
GP: I'll take a break. I'm actually finishing up building a music studio at my home in Melbourne so when that is done I'll lock myself in there. I'm doing a play for the Melbourne Theatre Company in December, January and February. It's called Poor Boy. It's a new play that hasn't been done before and has lots of Split Enz songs in it.

Q: It's a musical?
GP: No, it's not really a musical. It's a play with songs and actually quite heavy.