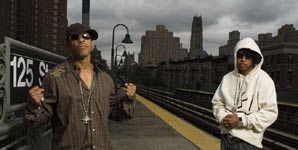 Legendary MC Guru and his partner Superproducer Solar are set to release a second LP, Jazzmatazz Vol. 4, on their very own label, 7 Grand Records. Vol. 4, State of Clarity is one of the feaured tracks, check out the video directed by Solar, the video for State of Clarity was derived from an animated movie called Fritz The Cat.

With a career that spans over a decade and 11 LPs deep, Guru has been able to stay relevant when many of his counterparts have faded into the background. When asked how he has been able stay such a viable force in the music industry, Guru states "be honest with yourself, be original, be open to criticism and don't be afraid to reinvent and recreate yourself."

Born and raised in New York, Superproducer Solar is the sound of 7 Grand Records. Garnering respect of his own in hip-hop circles, this beat maker has produced tracks for acts like Talib Kweli, Jean Grae, Styles P., Jaguar Wright and B Real, to name just a few. Creatively complex or geniusly minimalistic, Solar is a complete producer.