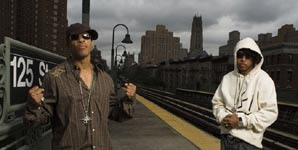 Contactmusic chats with legendary emcee Guru (GangStarr) and producer Solar, the teaming that has already produced three hit albums (Version 7.0: The Street Scriptures, Jazzmatazz Vol. 4 and The Timebomb / Back To The Future), will release their latest collaboration Guru 8.0 Lost & Found (7 Grand Records).

Guru: I think that I am more than relevant now because...
Solar: I don't think she asked you why.
Guru: Okay. So hell yeah.
Solar: Just for the record, so we are clear, we have the number one Hip-Hop and Jazz act on planet earth and tour numbers and sales are high. So I would say that that alone qualifies not only Guru but me as relevant.

Solar, you've said that you didn't think Hip-Hop was dead but had probably been 'kidnapped and ducked taped'. Is this the premise behind the new album '8.0 Lost & Found'? Are you guys showing Hip Hop what they've been missing?

Solar: (Laughs), I wouldn't go as far to say showing Hip-Hop what's it's been missing, but I would say that this is our offering to real Hip-Hop and that we set out to make real Hip-Hop. This is real Hip-Hop 2009, not real Hip-Hop 1995 or not even real Hip-Hop 2005. This is 2009. And judging by the press responses and those who have gotten the record so far, it has been overwhelmingly positive.

'Jazzmatazz' was obviously about bringing generations together and the volumes worked well in achieving this. What can we expect from this new track?

Solar:. Basically what I've set out to accomplish is pretty much explanatory in the title 'Lost & Found' - in my opinion Hip-Hop has been lost, it's gone off the course to where it was for various reasons. When Hip-Hop was created I was a part of it, born and raised in New York City I grew up on it as a shorty and I've seen all the positive things it can do. I've live through some of the darkest and negative periods that it has gone through also and I believe that an album like this begins to turn the tide. The powers that have been watching Guru and Solar are seeing how brilliantly we've constructed 7 Grand, a record label that is in profitability in tough times. I think the fans are going to enjoy the album, new fans are going to enjoy the album and I think that we are going to reach people that wouldn't ordinarily listen to Hip-Hop but will to tune into the message of Guru and Solar.

For those who don't know your background Solar, tell us?

Solar: My discography most notably starts with the 'Street Scriptures' in 2005 then goes on to 'Jazzmatazz Vol. 4' which was a very successful album, it reinvigorated the franchise more so than 'Time Bomb' the accompany mix CD or the 'Jazzmatazz' mix CD that accompany 'Jazzmatazz' which was the first rap or Hip-Hop underground version of a 'Jazzmatazz'. And now, this album. Through these albums I have collaborated with some the greatest musicians and artists of all time in the areas of hip-hop, jazz, R&B and also rock.

Apparently 7 Grand is not just a record label but a Movement. Do you have a secret hand shake?

Solar: (Laughs). Nice one. No, we are not a secret society, we don't get down like that (laughs), we are honest, open, loving and caring individuals, so there are no secrets on any level. Our listeners are stimulated by the intelligence of 7 Grand and that's where the movement part comes into it because we're not just saying listen to our music we're embedding messages into the music, positive messages and saying there are different ways to take this whole music thing now, you don't have to be force feed anymore.

So, who are the 'Creative Vampires'?

Guru, you are a big promoter of not wanting to sell out, but truthfully have you ever felt the pressure financially to commercialise your music?

Guru: No, because if that was the case I would have done it. The music and the integrity and the culture means more to me than that, so if I had nothing and I was broke I would still be making music because it is something I got into because I loved it not because I had to pay my rent with it. I was fortunate because of my talent and my grind to be able to make money from it.

But it is still a job?

Guru: (laughs) Yes it is important, we're running a business here and that's where the challenges come with being an artist on your own label but we welcome those challenges and we've made things happen. We don't have a secret benefactor or corporate entity that is funding this.
Solar: Sells approaching now is almost half a million already and for an independent I don't need to tell you that that is excellent.

I am always saying the wrong thing at the wrong time, what is the most inappropriate thing you guys have ever said?

Believe me I've had my moments.

Guru: I feel that what we are doing right now is so appropriate. It may be the wrong time for someone else because it might not something that they want to hear but it is something that they have to hear. It's like that Al Gore book ' An Inconvenient Truth' (laughs). But y'know I have been there a few times, those uncomfortable silences.

Guru, you being so out spoken what are your hopes for Obama's Presidency?

Guru: I feel inspired and proud. We've had a few years of extra added stress, and Obama offers hope, he offers a clear decision making process and the whole aspiration of change.

Solar: Y'know we aren't politicians but as ambassadors of music, when we travel we are able to see how people around the world are affected by this. It's a good look for America. The excitement and optimism of his arrival is palpable. You just don't feel that crazy tension. We were in Europe for the prior G20 or some sort of summit when it was the Bush Administration, and you could feel the angst in the air and there was a heighten security level.

Solar: I agree, but it seems more calm as opposed to it being tense. 7 Grand looks for confident leadership and there is no question in my mind that he is at the very least competent to handle the job. We are not here to do any kind of commentary but as global citizens we make it a point to show interest.

So going back to the album what are the stand out tracks?

Guru: I would say 'Lost And Found', it's the first track and it sets a theme lyrically for what the album is about. There's a joint with Omar called 'Ride' because of the way the beat is flowing and the way that Omar put the soulful lyrics down.


Solar: I would say 'Divine Rules'. Personally when I listen to any music I like to hear something that is different and that grabs me, 'Divine Rules' is way different from anything that I have heard in any recent years in Hip Hop.


And what about that track about the female journalist who has a habit of sleeping with the people she interviews?

Guru: (Laughs) I like to use storytelling and I start with something that's real. It's not that I haven't seen brilliant and professional journalists but I have seen (laughs) the other side too. I just wanted to write about something different.

Ok, let's end with a game, I'm going to call out a few random names and I would like you guys to give me a one word reply in your opinion that sums up that artist?