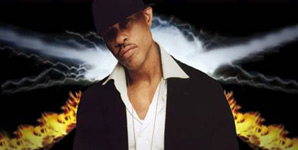 After ten years Guru finally returns to Southport Weekender. Much has changed since then, musically as well as politically. It seems fitting for such pioneer of hip hop music to be in the UK representing with Solar and the Jazzmatazz crew. We got back stage after a great gig at the Funkbase at Southport Weekender 43 with CM asking the questions.

CM: "You know you always seem to do something special when you come out and perform live over here"

Solar: "You know the UK is a special place. We've always got time for the UK."

CM: "Tell us about what you've been doing on tour. You've been to the Jazz Café. What was that like?"

G: "We started out in Portugal which was our first time there and then we went to the Jazz Café in London. The Jazz Café is always off the hook! Because it's for real music lovers and it's a real classic venue. And big up to all the staff there. They treated us like family! From there we went to Edinburgh and now we're here. I haven't been in Southport in years"

CM: "Back here then. This is the second time you've played here. What's it like compared to ten years ago? Last time you were here you were in a smaller room and stage and you've grown musically since then. Now we are in a different place and different time so what's it like coming back to a bigger room?"

G: "It's like an euphoric feeling and it's also a feeling of accomplishment and so forth and like I said a home coming."

CM: "Last time we hooked up you were on a tour of Europe, US, UK, This album is out on the streets now. So what's it like to get this street album out as you've said it's very different from what you've done before?"

G: "It's rejuvenated the Jazzmatazz concept but I'll let Solar answer this question".

S: "The idea in my mind seemed that there was a fragmentation going on between Jazzmatazz fans and Gang Star fans and I really didn't see that as it should be. These groups created Gang Star and I had the up most respect for their taste and sensitivities if you will, so I had to come up with the unenviable prospect of an album that could essentially bridge the gap between the two. That became the 'Time Bomb' CD or as you call it the UK 'Back To The Future' CD and it's been a truly successful only world tour for a mix tape, which is very strange and we're on the books for the biggest underground tour that I know of."

G: "We've been cooking up some tunes for real! There's 19 bangers on there and you know what, it ain't Jazzmatazz. We're putting Jazzmatazz on the back burner for a minute and this right here is some raw street hop. Its bananas and again you'll see another level of Solar's production. It's a phenomenon it's never been seen before."

CM: "We were reflecting that there's no real hip hop out there right now. So you boys gonna bring it back?"

You better tell your mans to stop falling victim to the propaganda
Because all these foul messages are like a cancer
Eating away at the lives of those already trying to survive
Shit ain't nothing wrong with a 9-5."

"Alright that's enough. You've got to come and see a show for that."

CM: "So what do you think when you tour the world and see hip hop in other countries? The UK has got the grime going on for example?"

G: "Yeah big up. Big up to Wiley and all those grime cats for real."

CM: "What do you think to the UK scene and how it's different from yourselves?"

G: "I always like the UK and like to stay in tune with it. It's cutting edge. It's always been DJ orientated, keeping the vinyl alive, they keep that real soul music alive. Some great genres have come from here like jungle, drum & bass, garage, we said the grime, and take it back to Acid Jazz. All of that. There's always been something going on here."

CM: "So the new album is coming out. It's gonna be very hip hop. Are you gonna be touring this album as well?"

G: "Yeah. It's starting in the states in Spring."

CM: "When you settle for the latest Jazzmatazz album do you think it's gone beyond your wildest dreams or are you anticipating it?"

S: "I mean for Guru he's worked with all these legendary iconic figures in the past so for me with all the resistance I encountered on the first album it was certainly a great pleasure to know that these great iconic people would raise my production and equally an interview with Bob James said that I was one of the best producers he's ever worked with. Working with David Samborn, Damien Marley and just to be able to work with these legendary figures and make a Jazzmatazz mix tape accepted without a multimillion pound budget like the first one I take as a great compliment. To a degree we're the unsung heroes because we're out here fighting for real music and we're not seeing the money that others are getting and we're not complaining you know what I mean? We're gonna fight it out till we get what we need just like Barack Obama. We're in here for the long haul baby."

CM: "Let take our hats off to you both as you've literally put your money where your mouth is. Let's talk about Obama. What do you think of him?"

G: "Well I like the way he's got a cool head. It's historical definitely. I just think about my pops being able to see that in his lifetime and that sort of thing but again we ain't politicians but we are definitely proud as Americans to be travelling the world right now."

The interview ended with a lot of love and appreciation and one thing is for sure Guru, Solar and Jazzmatazz crew are here to keep making great music. Guru mentioned www.7grandweshare.com for all budding emcees wanting to get involved. Check it out and watch out for more tours next years.