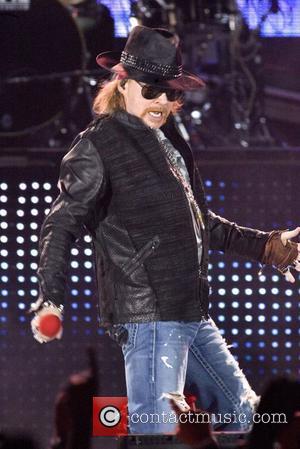 GUNS N' ROSES have upset more fans with their penchant for tardiness after showing up three hours late for a concert in Britain.
Axl Rose's band ignored Manchester Arena officials' 11pm curfew and took the stage shortly afterwards, concluding their show at 2.15am on Wednesday morning, according to reports.
As the band played its final number, just over half the arena's capacity crowd were left, after many fans walked out and then took to Twitter.com to blast Rose and his bandmates for their late arrival and midnight gig.
The rockers made no mention of their late arrival in a Twitter.com message posted shortly after they left the stage. It read: "A tip of the hat to the good folk at the Manchester Arena. To say Manchester rocks is an understatement! London calling!"
Guns N' Roses end their U.K. tour with shows at London's O2 Arena on 31 May and 1 June (12).