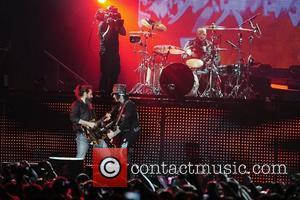 GUNS N' ROSES frontman Axl Rose was so furious with an unruly fan at the band's concert in Canada on Saturday night (17Dec11) he ordered a security guard to eject the gig-goer.
The rockers were performing at the Pacific Coliseum in Vancouver when Rose shouted at the crowdmember through his microphone.
He interrupted a song as he shouted to the fan, "Out, motherf**ker! Out! Get the f**k out! Yeah, you! See ya, you dumb**s motherf**ker."
As the venue's security guards dragged the overzealous fan out, the musicians waved at the man from the stage, while Rose told the audience, "That's the first person I've had thrown out for 100 shows... like the good old days."
The singer then launched straight into their track Happy Trails as the fan left the auditorium. It is not known what caused Rose to have the man removed from the venue.