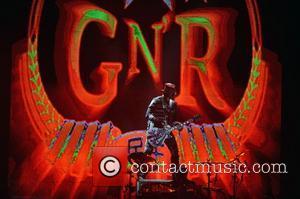 Former GUNS N' ROSES drummer STEVEN ADLER will expose his controversial history with Axl Rose's band and his struggle to stay sober in a new tell-all memoir.
Adler was fired from Guns N' Roses in 1989 - before Rose famously fell out with guitarist Slash - amid rumours the drummer's drug use was hampering his performance.
Last year (09), Adler was ordered by a judge to check into rehab following a 2008 felony drug charge. His battle with addiction was chronicled on U.S. reality TV show Celebrity Rehab with Dr. Drew and its spin-off series Sober House.
The star will now document his troubled rock 'n' roll lifestyle in print when he releases My Appetite for Destruction: Sex, and Drugs, and Guns N' Roses, according to HarperCollins.com.
The book is scheduled to hit shelves on 22 June (10).