'Shadow' is the first single from the upcoming Count Yer Lucky Stars album from Atlanta, Georgia's brilliantly named Gringo Star. The follow-up to 2008's critically acclaimed debut, 'All Y'all,' the Georgians showcase their catchy blend of pop and indie once more with the first glimpse of what to expect on Count Yer Lucky Stars when it comes out on April 30th 2012. 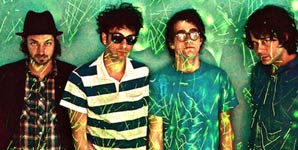