Green Day Star Armstrong Not So Sure He's Bisexual 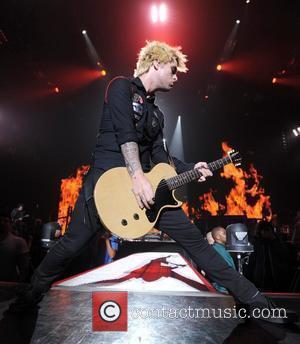 Green Day star Billie Joe Armstrong has attacked fans who still take issue with comments he made about his sexuality 15 years ago, insisting he expects more from people who follow his group.
The American Idiot singer has been married for 16 years, but it's a forgotten 1994 interview that still causes online fights in Green Day fan chat rooms.
Back then, the punk star said, "I think I've always been bisexual... It's a beautiful thing."
He's not sure he can still claim to be bisexual, but he tells gay magazine Out that shouldn't be an issue for fans.
He explains, "The fact that it is an issue is kind of phobic within itself. At some point... this should be something that's just accepted.
"I don't really classify myself as anything. And when it comes to sex, there are parts of me that are very shy and conservative. I want to respect my wife.
"My wife Googled 'Billie Joe Armstrong bisexual' (and) she's like, 'Yeah, there are about 20 pictures of you kissing different guys.'"